With the Merged cells manager, Power-user helps you spot and fix merged cells in your Excel spreadsheets.

The issue with merged cells in Excel

Merged cells can be a real nightmare for Excel users. When cells are merged:

How to use the Merged cells manager

The Merged cells manager of Power-user is a solution to comes in action. This tool will find all the merged cells in your current sheet, and let you unmerge them flexibly. To use it: 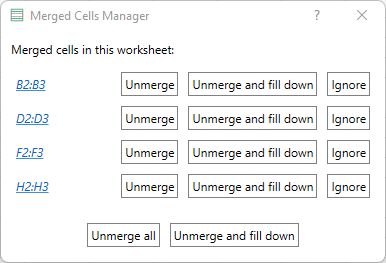 If you have hundreds of merged cells and need to unmerge and fill them all (for instance, so you can use formulas or PivotTables), this is something that would take you hours to do manually and that Power-user can accomplish in seconds.

Alternative to consider instead of merging cells: center across selection

Due to the issues listed above, we recommend avoiding to use merged cells. Instead, you can use Center across selection which looks very similar. Instead of actually merging the cells, it will only format the content of the cells as if they were merged, while keeping them as separate cells that are not impacting your formulas, Tables, PivotTables, etc.

You can find this Center across selection button from the Power-user ribbon in Excel.

Was this article helpful?

Thank you for your feedback

Sorry! We couldn't be helpful

Thank you for your feedback

We apprciate your effort and will try to fix the article

Articles in this folder -